A while ago, I transitioned to an Xbox Live Family Gold Pack. This allows us to manage our son's Xbox Live account from a single dashboard, and add Microsoft Points to the Xbox live account that we use on the Xbox in the bedroom.

When I created the family subscription, I was able to add several Xbox Live Gold accounts, and for each Gold account, the subscription length of the family membership was extended by each.  So I figured that I would do the following:

Unfortunately, this didn't work.  I was able to complete the first two steps, but when I try to re-add the account, I get an error.  It looks like the account is added to the family, but not that account is not part of the subscription.  So I won't be able to share Microsoft Points with that that account.

I am hoping that Microsoft starts to sell Xbox Live Gold Family cards (and Amazon sells them for a discount).


Update 5/14/2011: It looks like Microsoft fixed a bug that was preventing this from working. Today I was able to add the account to the Family Subscription, and that extended the subscription by 6 months.
Posted by Paul at 11:50 AM No comments:

I shouldn't have spent as much time on this as I did, but since I did I am posting it.
This weekend we watched Back to the Future I & II with our son.  While watching the second movie something started to bother me.  The main plot of the movie is that Marty had to go back in time to "fix" things, as when Marty returned to 1985, Biff had become a powerful man in the town because his future self, gave him a sports almanac, to allow him to make money by betting on sports.

Why does Marty feel that he needs to "fix" things, when he is arguably his is just as "guilty" as Biff.  At the end of the first movie, his actions changed the time line in 1985.  Biff was not George McFly's supervisor, and George McFly was an author in the changed 1985 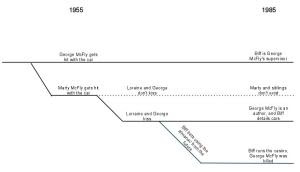 Email ThisBlogThis!Share to TwitterShare to FacebookShare to Pinterest
Labels: Back to the Future, General